Need prayers and your support

You can help me by donating & sharing a word with your friends and contacts. Your smallest contribution can be of great help.

Dad had a severe heart attack 10 days back. He was admitted in the ICU @ Ramachandra Porur for a week. Angioplasty & stent done for one clot, one more to be treated. He is bed ridden.

If you wish to donate can do so on my account
Dr.A.Carmalin Sophia Ayyappan
Bank: ICICI Adyar Chennai
Acc No: 035001534014
NEFT: ICICI0000350
Mail me once you have transferred
sophizz@gmail.com 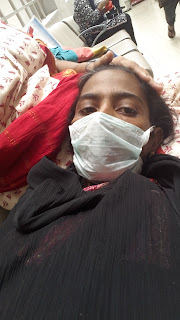 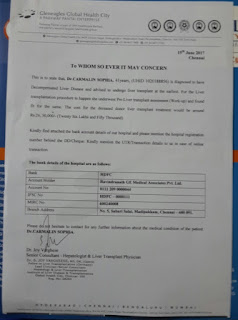 Posted by che sara sara at 9:39 AM No comments:

here is how it happens
Microbial desalination cell (MDC) is an emerging bio-electrochemical system. This is considered as one of the promising technologies for clean water and energy production. MDC technology is a derivative of the microbial fuel cell (MFC). This study reports bench-scale laboratory desalination using MDC loaded with granular coconut shell carbon, as a new electrode material in the anode compartment.

Read the article here
Posted by che sara sara at 5:34 PM No comments:

Chasing the cyclone, yes we were just behind the cyclone that hit Odisha and Andra pradesh. We drove from Bhubaneshwar to Gopalpur, Odisha and from Gopalpur to Srikakulam district of North coastal Andhra Pradesh and back to Bhubaneshwar. We were a team of 5 (Aditya, Viren, Saurabh, and myself), of which Aditya and Saurabh where localities from Odisha. It was few days after Cyclone Phailin had hit Odisha and AP. We a team of travel enthusiasts, decided to check out the damage and the rehabilitation work.

We started as early as 2am from Bhubaneshwar and drove to Ganjam, then to Brahmapur and Gopalpur on AH45/NH5. As we drove this route we had a wonderful view of the Chilika Lake and sunrise on the lake. The lake was flooded and we could see damaged electrical poles, houses, petrol pumps all our way through. We took a small break in between for chai and continued our journey until we reached Chatrapur. There we spoke to people and saw the huge damage caused by the super cyclone Phailin. We reached Gopalpur around 10 am after driving nearly 180kms. MayFair resort was our breakfast place. We got to drive ATV vehicles there. We started off again on our road trip approximately at around 12 noon. We reached Chikiti and Ichapuram at around 3pm in the evening. There again we saw the big damage of the cyclone. We spoke to the locals and continued our road trip to Srikakulam AP. It had become dark the time we reached Srikakulam. We decided to get back to Bhubaneswar. After a whole days driving all of us were very tired.

Aditya suggested Taptapani... and OMG..it was a surprise for me. We again drove into the rolling green hills, jungles washed by rains and clouds tucked within the distant hills – there is Taptapani located amidst the forests of Ganjam District of Orissa. Taptapani is mainly known for its natural hot sulphur springs whose water is considered to have medicinal properties.

I had a nice warm leg spa, and it was amazing... We were fresh as we were in the morning. The guys did go for a skinny dip on the other side. Since I didn't have clothes to change I could only do a leg spa.

We started back to Bhubaneshwar and realised that we were lost in the jungles. The google maps weren't working. There was no network on our mobiles. We could see no humans. For many many kilometers it was only jungles with no lighting. The only source of lights was our car head lights.

We panicked and thought we were lost. We hadn't had lunch nor dinner. We started imagining that there would be an maoist attack on us or some wild animal would eat us up. To add to our fear we saw bones of bulls and cows etc.

We saw some distant lights after 2 hours of aimless driving. We anyways didn't get down from our car. We lowered our car windows and asked them the route to the nearest Highway. We breathed a sigh of relief only when we hit the highway. We reached Bhubaneshwar back to our guest houses at around 4 am in the morning. So this was a continuous 24 hour drive, and getting lost in the jungle was the best part of it.

An unforgettable journey of the life time...

Pictures of the trip here

This post has been written in connection with the www.CarConnect.in contest on Indiblogger

I am an IndiBlogger